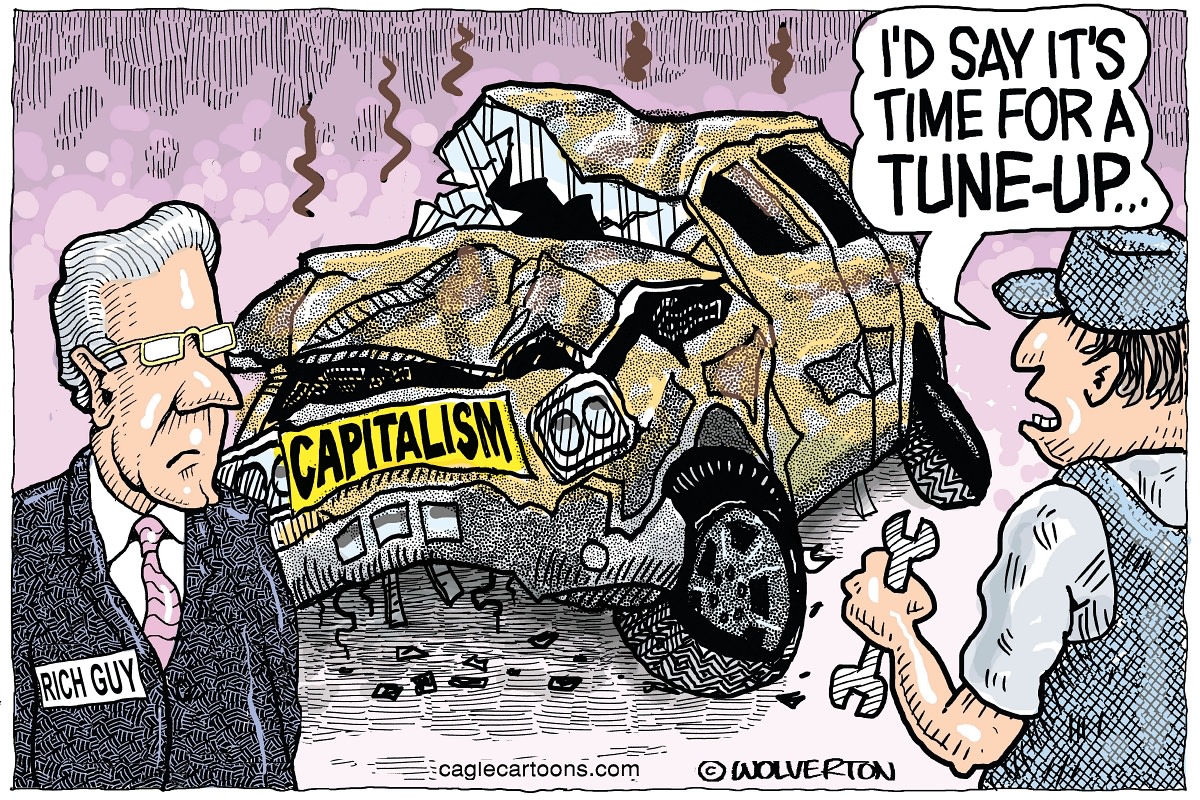 The truth on the markets, pillar of the capitalist ideology

Myra R. Free enterprise Comments Off on The truth on the markets, pillar of the capitalist ideology 7 Views

“Market mechanisms” and “market solutions”: politicians, bureaucrats, media pundits and academics like to refer to them as if they were somehow politically and ideologically neutral, above partisanship. They are not. Or as if they were only fair and optimally efficient, which they are not either. The market is just another human institution invented and reinvented periodically throughout human history. Like other institutions, markets were strictly regulated or excluded altogether when human communities rejected their outcomes as socially unacceptable. Philosophers such as Plato and Aristotle shared profound critiques of markets and debated efforts to exclude or regulate them. Many other critics and debaters followed, enriching the tradition of market criticism.

Markets are a means of distributing goods and services from producers to consumers. They are established when the division of labor occurs in communities rather than when each person or family produces all that they consume. Markets involve quid pro quo exchanges between those looking to sell and those looking to buy goods and services. Alternatives to markets have always existed and still exist today. Councils of elders, chiefs, local government authorities, religious authorities, and various cultural traditions, separately or together, distributed produce from producers to consumers, deciding who gets how much. Within households or families, kinship rules, including patriarchy and matriarchy, have organized the distribution of products from producers to consumers.

The market mechanism is very simple: people who have wants or demands engage with people who own the goods and services. Owners have the right to sell what they own if those who want to – potential buyers – offer something in return that the seller is seeking. The two owners, one on each side of the exchange, bargain or negotiate on the precise terms of the exchange: how much of one item is equal to the quantity of the other item being traded. If and when an exchange ratio (a price) is reached that both parties agree to, the exchange is made. The market is thus “cleaned up”. He successfully distributed the products to consumers.

The problems with the market’s distribution system immediately arise once one wonders how the market handles distribution when sellers and buyers arrive with very different plans of what they have to sell and what they wish to buy. If for some reason buyers are looking to acquire 100 of any item while sellers are only looking to acquire 50, the markets will react in a very specific way.

Word spread that there was a “shortage” of the item in question; demand for the item exceeds its supply in the market. Buyers immediately compete for the shortage item by driving up the prices they can supply. As prices rise, poorer buyers drop out of auctions because they cannot afford higher prices. If, however, prices continue to rise, buyers who have a little more purchasing power than poorer ones also drop out because they too cannot afford higher prices. Eventually, the number of buyers drops to 50, the shortage is declared over, and the price stabilizes at the highest level needed to equalize demand with supply. The exact opposite happens when demand is less than supply.

The market mechanism thus distributes any item with a relatively short supply (short relative to demand) in a way that discriminates against those with little or no wealth versus the rich. Markets are by no means neutral or “above” conflicts between rich and poor. Of course, the seller in this case could have chosen not to raise prices and produce or order more products to sell. Free enterprise capitalism leaves in the hands of employers (less than 1% of the population) the decision to meet supply shortages by raising prices (causing inflation) or increasing production. Employers make their decision based on the benefits they derive or protect. The rest of us live with the consequences of their decision. Nowadays, employers seem to profit from inflation.

Market advocates counter that rising prices are the market’s way of “signalling” producers to produce more so that they can take advantage of the high profits generated by high commodity prices. However, this “signalling” function is well known to all employers. They know that if they responded to the signals by producing or ordering more, the high prices and profits they enjoy would quickly disappear. Thus, employers often do not rush to produce more. And as high prices proliferate in the market system, more and more sellers begin to explain and excuse their price increases because their “costs have gone up”. The rest of us watch this spectacle of employers profitably using each other as an excuse for rising prices even as they collectively force inflation on the rest of us.

Capitalists long ago learned that they could profit by manipulating both supply and demand to create or maintain “shortages” that would allow them to fetch higher prices. Capitalism created the advertising industry to stimulate demand beyond what it might otherwise be. At the same time, each industry has organized itself to control supply (via informal agreements between producers, mergers, oligopolies, monopolies and cartels). Social conditions and changes beyond the control of capitalists force them to constantly adjust their manipulations of supply and demand. In reality, markets are useful institutions that capitalists can manipulate for profit. In the ideology, markets are useful institutions for capitalists to celebrate as somehow ideal pathways for everyone to peak efficiency.

Seeking, finding and accepting a job offer is also managed by the markets of modern capitalism. If there are more working-class workers looking for work than available jobs, employers can cut wages knowing that desperate people will often accept lower wages at the risk of not earning wages. This process has gone so far several times that it has caused a backlash. Workers demanded and obtained a legally enforced minimum wage. Employers have primarily fought and opposed minimum wage laws, and once these laws were implemented, most employers resisted minimum wage increases, often successfully. The US federal minimum wage rate of $7.25 per hour was last raised in 2009. Employers are also encouraging automation (replacing jobs with machines), offshoring jobs overseas and the arrival of immigrant workers. These steps involve multiple levels of labor market supply and demand manipulations with the goal of slowing, stopping, or reversing wage increases. Employers manipulate labor markets, like product markets, for profit.

Another market handles loans. Lenders and borrowers negotiate an interest rate on which they can agree to make it possible to grant credit and contract the corresponding debt. These days the central bank of the United States, the Federal Reserve or the Fed, raises interest rates to slow or reverse the inflation that it has failed to prevent or slow down over the last year. This increases the cost of all borrowing (for mortgages, car loans, credit cards, etc.). Again, it is the poorest among us who suffer the most, followed by the middle class. Higher interest rates are likely to bother the wealthy less. Also, the wealthy, who are themselves lenders in many cases, tend to enjoy higher interest rates.

The Fed could have pressured President Joe Biden to follow former President Richard Nixon, who in 1971 imposed a wage and price freeze to stop inflation. He decreed and imposed that the market would not be able to influence and fix prices for some time. Doing this again now would at least less discriminate against the poor and the middle class, instead of protecting the rich. One might have expected this from the Biden regime, which controls both houses of Congress, but market fetish and neoliberal thinking and politics seem to rule both, the US Senate and the House of Representatives.

The business class itself often suspends and shifts markets. When lucrative market manipulation becomes too costly, capitalists often merge or buy themselves out. External market relations (to each company) between them then disappear. In their place, directly planned internal (firm) production and distribution of goods and services occur without trade.

Markets existed long before capitalism, but capitalism, as Karl Marx noted, made them ubiquitous, almost universal. Capitalism also elevated and praised markets – and their prices – to give them ideological importance, which leaned toward the absurd. As RH Tawney so brilliantly showed in his Religion and the rise of capitalism, early European capitalism had to fight hard to discard the notion of a “fair” price inherited from the medieval Catholic Church. The “right” price—consistent with the laws of God and the teachings of Christ as interpreted by the Church—often differed from the “market price” that balanced supply and demand. To win in this fight, the defenders of capitalism have found it useful to build a sort of secular religion around markets and their equilibrium prices, attributing to them divine qualities of efficiency, fairness and other similar attributes. . However, as capitalism sinks deeper and deeper into trouble, it is time to overthrow the false gods as part of the process of finding our way to better institutions, and indeed to a better system.

This article was produced by Economy for alla project of the Independent Media Institute.