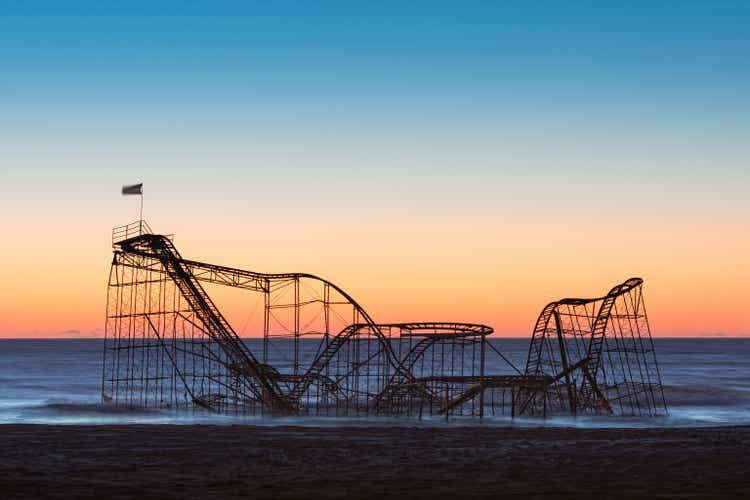 Stocks finished the week well, thanks to option expirations. But if it hadn’t been for the monthly options expiration, last week would have been a disaster. The S&P 500 (SP500) was down more than 4% at its Thursday morning low but ended the week down about 1%. The weekend rally was helped by the slow decline of the VIX index (VIX).

The options expiration was successful in keeping markets afloat and did not allow the S&P 500 to drift too far from significant open interest levels around the 3,800 and 3,850 levels. of the week, the severity of higher strike prices helped drive the index higher through Thursday and Friday.

Monday begins a new options cycle, which means that the pushing and pulling of options will begin again, and the market will be free to move much easier. Open interest levels for the S&P 500 will be nearly halved with the removal of the July 15 trading date.

Additionally, there has been a steady decline in implied volatility levels in the S&P 500 throughout the week. The large intraday rebounds seen on Wednesday and Thursday were helped by lower implied volatility throughout the day. This would suggest that the intraday price action was more mechanical and options related than due to the underlying macroeconomic backdrop.

On top of that, data out of China was equally bad, with second-quarter GDP largely missing consensus estimates, rising just 0.4%, well below forecasts of 1.2%. This news went unnoticed in US markets during Friday’s trading session. Yet this has not gone unnoticed in Asia, with the CSI 300 index falling around 4% in the past week and the HK Hang Seng index down around 6.6%.

If that wasn’t enough, Europe had its problems, with Italian Prime Minister Mario Draghi announcing his intention to step down. The news sent Italy’s 2-year yield skyrocketing, causing the euro to fall sharply against the dollar.

The euro is trading at its lowest point against the dollar in nearly 20 years and at par with the dollar. Add to that weak economic data from China and Japan’s reluctance to abandon its negative interest rate policy and control of the yield curve, the dollar also strengthened against the Japanese yen and the Chinese renminbi. .

The macroeconomic backdrop did not support the rise in equities and was a key reason markets fell sharply on Wednesday and Thursday morning. But once implied volatility and the VIX began to melt, stocks were boosted through Friday’s close.

But all is not well under the surface. As the spread between the USD 3-month Libor rate and the effective US federal funds rate shows, a sign of tension may have emerged in the overnight lending markets. The gap is not large compared to the peaks of 2018, 2019 or 2020, but it is at its widest point since Russia invaded Ukraine and should be watched closely. The widening of the spread may signal increased equity market volatility.

Against this backdrop, the meltdown in implied volatility is set to change this week as the market moves past VIX options expiration and begins to focus on macro issues with a meeting of the European Central Bank and Bank of Japan this week. , as well as the FOMC meeting on July 27.

The FOMC cycle should start

Volatility on the rise?

The VIX appears to be set up the same way it was at the June FOMC meeting. With volatility falling, it is possible to push significantly higher between now and the FOMC meeting.

Can the market continue to rally, of course? But there continue to be plenty of other reasons for him not to rally. Given several geopolitical factors, as well as an upcoming central bank ECB and BOJ meeting this week and the FOMC next week, the risk of further downside headwinds has not yet been ruled out.