It seemed remarkable that Scott Morrison, back from Glasgow where Australia remains a criticized latecomer despite adopting a 2050 target, is launching a campaign on climate policy.

Alternatively, as some suggest, maybe the Prime Minister just wanted to tick that box earlier, before moving on to more sympathetic questions.

Either way, it didn’t go well.

His policy of promoting electric cars, which contained minimal substance, backfired. And he got stuck with an overly smart attempt to corner Labor on carbon capture and storage.

Morrison surely must have seen the dangers of exposing himself on electric cars, after everything he had said when denouncing Bill Shorten’s policies in 2019.

How did Morrison believe he could make a turnaround in the political spotlight without being called to account? Especially when his political honesty is the subject of the most intense questioning.

Sean Kelly, columnist and former staff member of Julia Gillard and Kevin Rudd, writes in his recently published book The Game: A Portrait of Scott Morrison that the Prime Minister “never feels hypocritical in himself. or lie, because he always means exactly what he says; it’s just that he only thinks it when he says it. The past and the future disappear.

Unfortunately for Morrison, electronic music videos don’t go away. The ones on electric cars were there to be played over and over again.

Morrison himself explained his about-face by saying it was a “work lie” that he campaigned against electric vehicles in 2019. “I didn’t. […] I was against the policy of Bill Shorten’s tenure, trying to tell people what to do with their lives, what cars they were supposed to drive and where they could drive. “

Devastating criticism from one of his own

There was another problem with Morrison’s decision to get into a hydrogen car on his first visit to Melbourne in a very long time.

Its policy – $ 178 million for refueling and refueling infrastructure and the like – lacked substance. There were no subsidies, with the government saying it would not be a good use of taxpayers’ money.

Hours after the announcement, a devastating critique of politics came from its own side of politics, delivered by NSW Environment Minister Matt Kean.

Polls show Australians want to buy electric vehicles, but they continue to languish at less than 1% of new car sales. What is happening?

“I encourage the federal government to consider doing things like providing direct support to people who wish to purchase an electric vehicle. There are a range of taxes and fees that could be waived,” Kean said.

“We want to see things like the federal government investing more heavily in electric vehicle charging infrastructure. The funding they’ve put on the table doesn’t even match the funding we’ve put here just for the state of. New South Wales .

“But the biggest thing the federal government can do is fix the fuel standards issue. Australia has some of the worst fuel standards in the world,” which means it “is becoming the dumping ground. for vehicles the rest of the world does not want “.

The New South Wales government is forward looking on climate issues, and Kean and Morrison have an interesting history. The Prime Minister took it down dramatically last year after Kean said “some of the most senior members” of the Morrison government were concerned about its climate change policies.

In one such statement from the Prime Minister “right now”, Morrison replied that Kean “doesn’t know what he’s talking about” and said “most members of the Federal Cabinet wouldn’t even know who Matt Kean was. “.

They certainly know now. Kean is treasurer as well as Minister of the Environment in the Perrottet government, and this government is ready to envy the feds when it feels like it.

An obvious trap for Labor

In another climate announcement this week, Morrison said the government would contribute $ 500 million to a new $ 1 billion fund, administered by the Clean Energy Finance Corporation, to help small businesses bring low-emission technologies to market.

The legislation will contain a provision expanding the remit of the CEFC to allow it to invest in carbon capture and storage, which it is currently prohibited from.

With Labor having consistently opposed such an enlargement, the government has said it will put pressure on the opposition. But the Labor Party has taken a look at the trap and seems determined to avoid it. He said he could support the change, as the $ 500 million would be “new money” for CEFC rather than a reorientation of existing funds. Meanwhile, a few renegade Queensland Coalition Senators Matt Canavan and Gerard Rennick have signaled they will vote against the fund.

The climatic awakening of the PM 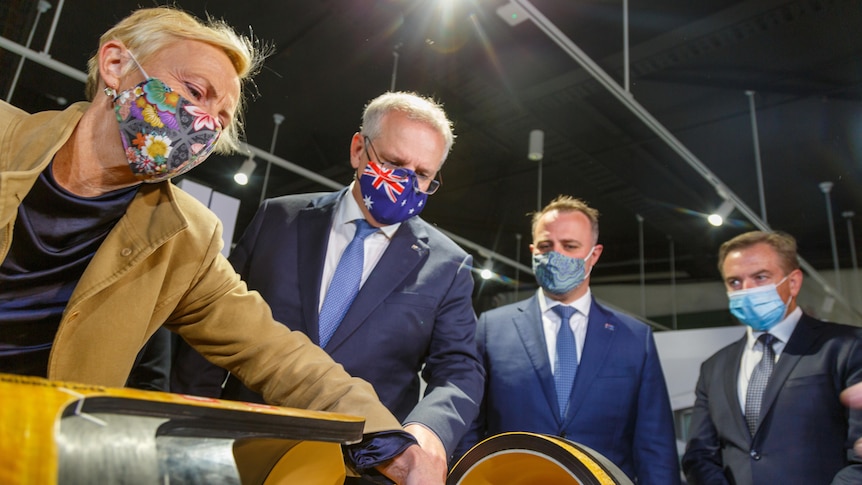 The Prime Minister no longer compares electric vehicles to a weekend war. This is not a climate conversion but an awakening to a changing political landscape, writes political correspondent Brett Worthington.

More generally, Morrison this week accentuated the Coalition-Labor contrast he has put in place on climate policy, between a government that encourages and supports and an opposition that regulates and taxes.

He summed up the dichotomy he wanted by saying that “we believe climate change will ultimately be solved by ‘can do’ capitalism, not by ‘don’t’ governments seeking to control people’s lives and tell them what to do, with interventionist regulation and taxes that just push your cost of living up and force businesses to shut down ”.

Indeed, he seeks to use contrast in the broad sense. “I think it’s a good motto to follow not only in this area, but across the spectrum of economic policy in this country,” he told a business audience. “We’re a little used to governments telling us what to do over the last couple of years. I think we need to break that habit.”

It goes back to the “free enterprise” ideology of the Liberal Party, which has had to deal with the pandemic when the government was spending heavily to keep things afloat. It also harnesses the post-containment feeling of those who are exhausted by restrictions and ordinances and welcome “freedom” once again.

But when it comes to climate policy, the reality is far from so simple.

It has been repeatedly pointed out that “taxes” – taxpayers’ money – fund the many billions that the Morrison government has pledged to encourage “capitalist” solutions.

While exposing “dynamic capitalism”, the government is in effect pursuing an interventionist approach by putting all its eggs in the basket of technological support and not enough in that of market creation.

“Marketing Scotty” loves slogans, but “dynamic capitalism” doesn’t sound like a future. “Capitalism” works like an economic system (with more than a little help from governments), but it’s more than awkward in the context of a sound sample.

Michelle Grattan is a professor at the University of Canberra and chief political correspondent for The Conversation, where this article first appeared.

Previous Is Surface Oncology (NASDAQ: SURF) a risky investment?
Next A look at the fair value of Prosperous Printing Company Limited (HKG: 8385)