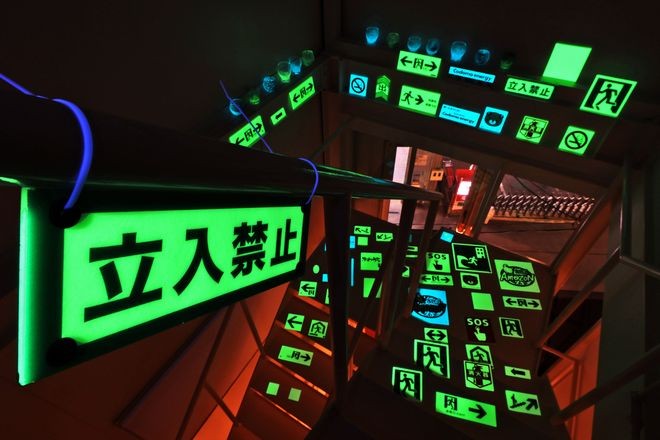 OSAKA – When the sun goes down, panels made with a special tile material produced by an Osaka-based start-up help light up the night across Japan.

The material, called Luna Ware, absorbs energy during the day and releases it at night, shining brightly.

Luna Ware is now used in emergency exit signs at Tokyo metro station complexes and on a building in Wakayama Prefecture. It is also used in train stations and school billboards in Fukushima Prefecture.

Developed by Codomo Energy Co., Luna Ware is made by mixing a glassy glaze with a luminous pigment before the baking process.

The company said it can continue to glow at night for more than 12 hours after refueling with sunlight or artificial lighting during the day.

The product is not dependent on electricity, so it is environmentally friendly and can shine even in the event of a power failure. It is resistant to flooding and fires because its phosphorescent characteristics are not lost by exposure to water or flame.

It resists wear and can therefore be used on ground surfaces with heavy foot traffic.

Luna Ware material produces illumination when it is crushed into pebbles and scattered on the ground. This is how it is used in tourist sites in Japan, including the Daigoji temple in Kyoto, a UNESCO World Heritage Site.

EXPECTED ATTENTION IN 2018 THE RESCUE OF CAVES

Luna Ware was also instrumental in the 2018 rescue of 13 people, mostly boys, trapped in a cave in Thailand that kept the world on their toes for more than two weeks.

A large pool of water created by heavy rains separated the boys at the bottom of the cave from its entrance. Rescuers in the dark struggled.

Enter Yasunori Iwamoto, President of Codomo Energy, who has offered to supply several hundred pieces of a Luna Ware product.

Divers wore some of them on their helmets and fins to allow themselves to be located by colleagues and left others at the bottom of the pool to act as guides, officials said.

THE IDEA CAME FROM THE MAKING OF PORCELAIN

Iwamoto, 59, started out as a builder who worked, among other things, installing modular baths and renovating homes and other structures.

He sometimes handled building materials containing toxic chemicals. He thus develops the desire to achieve lifestyles respectful of man and the environment, it is for this purpose that he founded Codomo Energy in 2004.

He named his company â€œkodomoâ€, the Japanese word for child (ren), out of concern for the protection of the younger ones, who will be the main players in the next generation.

He started developing Luna Ware after hearing about a product from Arita, a traditional porcelain from Saga Prefecture, which used a luminous pigment. He thought he would use this technology to create a product for energy saving and disaster management purposes.

Plastic and other products using luminous pigments were already available, but Iwamoto believed he would be able to make a brighter product.

He relied on Arita ware technology to coat the porcelain with glaze and fired it to create a vitreous layer.

He thus created the Luna Ware, whose phosphorescent characteristics are semi-permanent because it is made by mixing glaze with a luminous pigment before the firing process so that the pigment ends up being vitrified and protected from air and water. humidity.

Iwamoto released the first Luna Ware model for sale in 2009 and has continued to improve it.

He installed three ovens in the back of the head office and made hundreds of test products to study, over and over again, at what temperatures and for how many hours the products had to be baked to achieve improved characteristics.

The current Luna Ware model was completed around 2013 or 2014 at the end of about a decade of development.

An emergency exit signage product using the Luna Ware has been certified by an institution registered with the Fire and Disaster Management Agency as meeting its performance requirements.

PRODUCED IN FUKUSHIMA AS A SYMBOL

Following the Fukushima nuclear disaster in 2011, the company’s Luna Ware mass production plant was set up in Kawauchi, Fukushima Prefecture, not far from the crippled Fukushima No.1 nuclear power plant.

Iwamoto had no connection with the community affected by the disaster, but he decided, partly at the request of the authorities concerned, to help advance the reconstruction work by creating jobs there.

Fukushima Prefecture is symbolic land where nuclear power, one of the conventional energy sources, has revealed its own limits. Iwamoto thought that making a bright, power-free tile product could help stimulate thinking about future energy sources.

The Luna Ware, unfortunately, is a bit pricey. An emergency exit sign of a standard size of about four inches per side costs about 25,000 yen ($ 220).

Iwamoto, however, remains as passionate as he was when he first developed Luna Ware.

â€œOur product will eventually gain recognition if only it is useful,â€ said the president.