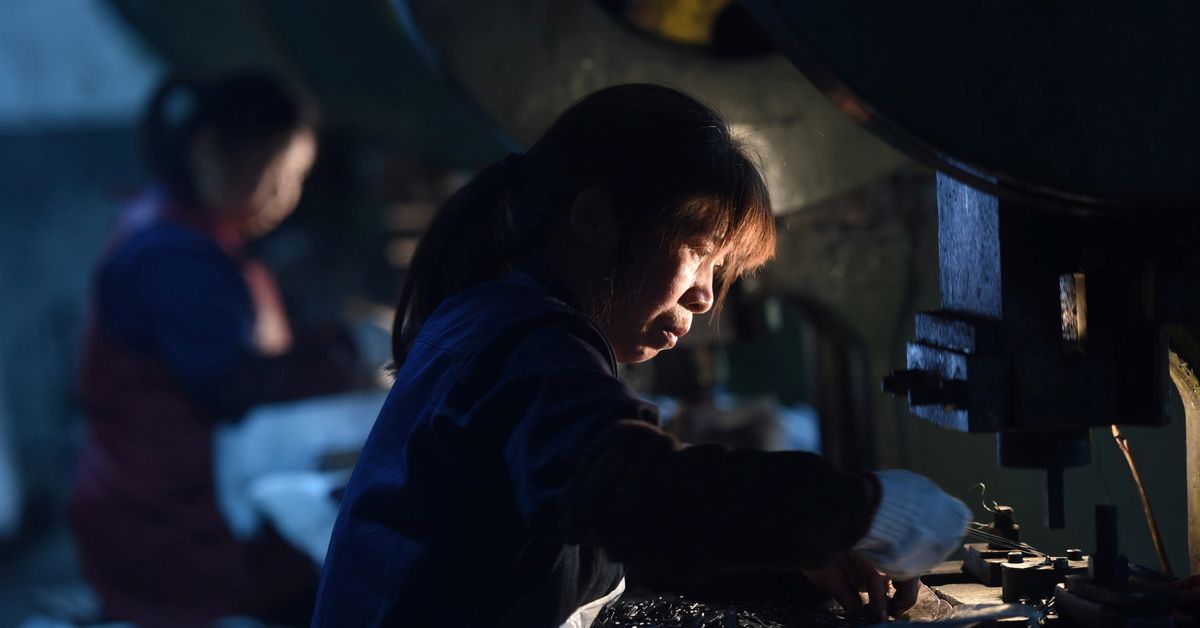 Employees work on a production line of metal parts for furniture at a factory in Hangzhou, Zhejiang province, China April 30, 2020. China Daily via REUTERS

BEIJING, April 1 (Reuters) – Chinese factory activity fell at the fastest pace in two years in March due to a local resurgence of COVID-19 and the economic fallout from war in Ukraine, it revealed on Friday. a survey, strengthening the case for increased political support. for the economy.

The Caixin/Markit Manufacturing Purchasing Managers’ Index (PMI) fell to 48.1 in March, indicating the steepest rate of contraction since February 2020, from 50.4 the previous month.

The 50-point index separates growth from contraction on a monthly basis.

The deterioration in manufacturing conditions was broadly in line with the official PMI released on Thursday, which showed activity had contracted at the fastest rate since October 2021. The Caixin survey of the private sector focuses more on small coastal enterprises than the official investigation. Read more

“The average of the two (PMI) is now below 50, and apart from the initial pandemic hit in 2020, it is now at its lowest since February 2016,” said Sheana Yue, China economist at Capital Economics.

“Given the composition of surveyed companies, the more pronounced reduction in Caixin’s reading suggests that the deterioration has been greater among smaller private companies and exporters.”

A new orders sub-index fell at the fastest pace since February 2020, when China grappled with the first wave of COVID-19 outbreaks, leading to a 6.8% contraction in gross domestic product in the first quarter of 2020.

In particular, the decline in new export orders in March accelerated as companies surveyed said the latest virus outbreaks in China, disruptions in the shipping industry and heightened market uncertainties due to the Ukrainian crisis led customers to cancel or suspend their orders.

Inflation in input costs hit a five-month high, with a number of factories attributing higher prices to tight global supply chains, which have been exacerbated by the war in Ukraine.

The world’s second-largest economy, which accelerated in the first two months of the year, is now at risk of slowing sharply as authorities restrict production and mobility in COVID-hit cities, including major economic hubs such as Shanghai and Shenzhen.

This slowed production growth with the production sub-index at 46.4 in March, the lowest since February 2020.

Government officials have pledged to roll out policies to stabilize the economy as downward economic pressure intensifies, a cabinet meeting said on Wednesday. Read more

The possibility that the People’s Bank of China will cut reserve requirement ratios in April has increased as economic headwinds have intensified, according to a report by the state-run China Daily, citing experts.

The employment index, which rose for the first time in eight months as factories ramped up hiring after the Lunar New Year holiday, was a bright spot in the otherwise slow Caixin survey.

“The prospect of war between Russia and Ukraine is uncertain and the commodity market is convulsing,” Wang Zhe, senior economist at Caixin Insight Group, said in a statement accompanying the data release.

“A variety of factors are resonating, adding to the downward pressure on China’s economy and underscoring the risk of stagflation.”