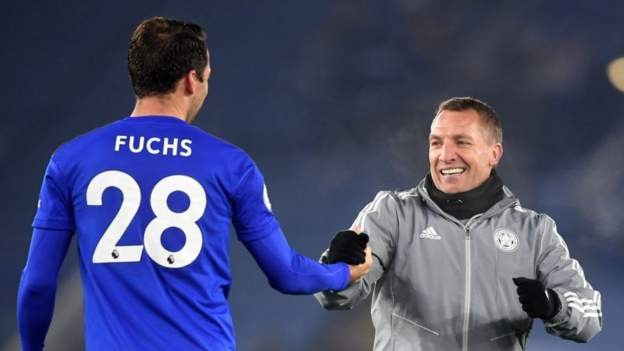 ‘Irrational’ for Rodgers to leave Leicester

Former Leicester City defender Christian Fuchs believes the Foxes should stick with Brendan Rodgers despite their poor start to the season.

A run of one draw and five defeats puts Leicester bottom of the Premier League after six games.

But Fuchs, who won the league title and the FA Cup while at the club, believes getting rid of Rodgers would be “irrational”.

“When he took over, the first game was against Watford and we lost 2-1, but since then we’ve taken such a big leap in the right direction.

“If he left, I think it would have a significant impact on the club because he really transformed the team from a counter-attacking team to a possession-based team.

“And if he leaves, who do you bring? Who can follow in his footsteps?

“You can’t make irrational decisions. OK, five losses. But you can’t forget the previous years, how successful he was.”

Rodgers appeared frustrated with transfer activity at the club over the summer.

Former Blackburn Rovers and Chelsea striker Chris Sutton believes it is only a matter of time before Rodgers leaves.

“It’s not going to last for Brendan Rodgers and if I’m being honest it looks like he wants out too,” he said on 5 Live’s Monday Night Club.

“The team’s performance this season has been miles away. Leicester should do a lot better than them.

“I’ve seen Brendan before when he leaves clubs, it looks like he wants out of his misery.

“I think it’s totally within their rights to have wanted new players, but this team should do better than they are.”

Previous Homebuilders are cyclical businesses, but do you filter them as such?
Next GEO stock: smoothed maturity wall, focus on deleveraging (NYSE: GEO)