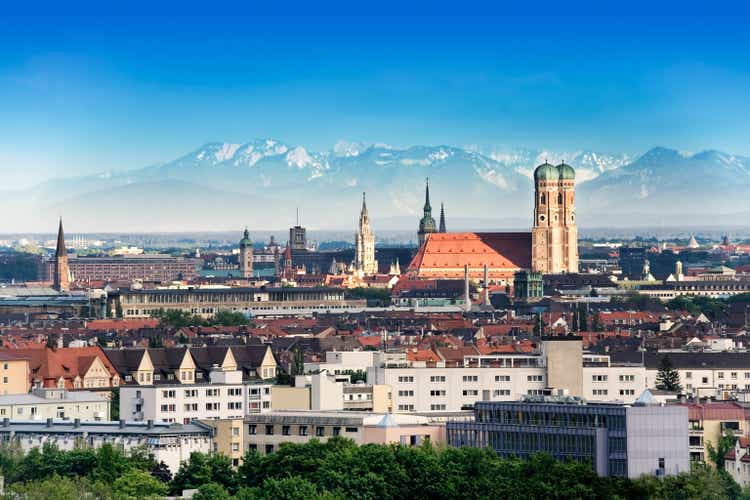 Presentation of the EWG

iShares MSCI Germany ETF (NYSEARCA:EWG) is an exchange-traded fund providing investors with exposure to German equities (large and mid caps). The fund was launched on March 12, 1996, and assets under management today stand at $2.37 billion, indicating a reasonably high level of popularity. The fund’s expense ratio is 0.50%.

EWG invests in accordance with its benchmark, the MSCI Germany Index. As of January 28, 2022, the fund had 61 holdings; that’s significantly less than EWG’s US counterparts (eg, the SPDR S&P 500 Trust ETF (SPY), which holds the stocks of the 500 largest US companies). The low number of holdings is due to the fact that although Germany is a developed country, the country’s stock market is not as developed as the US stock market.

Over the past year, fund flows have been negative, with sentiment (at least as expressed via EWG fund flows) clearly lagging, especially more recently.

It is always difficult to justify an investment in mature stock markets outside of the US, as US equities tend to perform very well. Generally speaking, the implied yields on offer should be high elsewhere, unless the implied yields in the US market are disastrous (due to overvaluation or other risks).

As illustrated below, EWG did not perform particularly well; it is still trapped in a long-term trading range dating back many years. EWG still hasn’t firmly surpassed its 2007 peak.

Also note that the current yield of the fund, calculated on the basis of the 30-day SEC yield, is 1.45%. So, without significant capital appreciation, returns are likely to be low in the future. Still, German stocks aren’t as expensive as US stocks, with EWG’s price-to-book ratio (according to iShares) being around 1.90x as of January 27, 2022.

Here’s EWG plotted in terms of SPY: Between 2003 and 2007, the upward slope shows EWG’s potential to outperform US markets (as represented by SPY). But since peaking in 2007, Germany has lagged the US stock market.

It is difficult to justify the allocation to the EWG based on the prevailing long-term trend. Nevertheless, the value of the fund should be reviewed, as there is still potential for outperformance in the short and medium term.

According to a study by Fidelity, Germany is currently still in the middle of its current economic cycle (in the fourth quarter of 2021). A continued recovery sets the stage for cyclical outperformance.

This is relative to the positioning of the US economic cycle, for example; Fidelity suggests that the US economy is likely maturing in its current business cycle.

With the United States ahead in its economic cycle and possibly four rate hikes this year, it is possible that European equity markets will finally attract net inflows in 2022 (although this is not guaranteed).

An important consideration, and the reason why EWG often underperforms more “exciting” markets, is that the fund (which characterizes the broader German stock market, investing in Germany’s biggest companies) has no tech exposures as large as US stocks. funds.

The fund is, however, quite balanced, and its so-called “defensive” sector exposures (including Staples, Utilities, etc.) represented only around 18% of the fund as of January 27, 2022. Economically “sensitive” and “cyclical” sectors represented the balance (according to Morningstar data). So, with a continued economic recovery, EWG’s portfolio is well balanced. But another factor is that the fund’s underlying return on equity isn’t incredibly impressive, “helped” by a larger exposure to sectors such as financials versus generally more productive and growth sectors. faster (e.g. technology).

The higher exposure to more mature sectors like financials means that the ROE of EWG’s underlying portfolio (on average) is unlikely to beat funds that are “overweight” on technology. It also tends to mean that German stocks, on average, are trading at lower prices/valuations, so there is a balance to be struck. Yet the advantage of high ROE stocks is that they can move towards optimistic valuations, whereas a reasonably priced but lower ROE fund will struggle to generate high long-term returns regardless.

The forward earnings yield implied above is also quite high, at around 7.5% (year-end 2021). For a country with a still negative 10-year yield (see below, at -5 basis points), this is arguably exceptionally high.

The Morningstar consensus earnings growth forecast (on a three to five year basis) is also good, at 13.34% currently.

Estimated cost of equity for EWG

Since EWG only has exposure to Germany, calculating a fair cost of equity is relatively straightforward; a sum of the mature markets equity risk premium, the country risk premium (beyond the core ERP) and the German 10-year yield (i.e. the “risk-free rate”) long-term).

Professor Damodaran currently recommends a mature market ERP of 4.90%, with a German country risk premium of zero (Germany is a politically stable and economically mature country, so this is a fair assumption). As noted, the German 10-year is currently nominally negative, but we’ll just assume the risk-free rate is “zero” for this analysis (to err very slightly on the conservative side of things).

Despite Morningstar’s optimistic assessment of earnings growth of more than 13% per year over the next three to five years, we will aim for around half that number, dropping it to around 2% over the next three to five years. terminal year (which is always higher than the long-term growth rate of inflation in Germany). This is certainly on the conservative side, as it would assume that both inflation rates will stabilize from their above-average rates of late (5.3% in December 2021, year-over-year) . and real earnings growth (if inflation reaches 2% in the terminal year in this analysis; the sixth year) will be “zero” in the terminal year.

The result is that the fund is massively undervalued based on a cost of equity of 4.90%. What this really entails then, based on this conservative earnings growth trajectory, is that EWG’s implied cost of equity is at least 9.91%.

EWG has recently sold with other major stock markets, but the fact that the fund offers an implied yield of almost 10% in a country where long-term rates are still negative is very surprising. From a valuation perspective, while Germany may not be an exciting place to invest, I would say it still proves to be a viable alternative for US investors looking for international diversification. safe.

And if a more optimistic earnings forecast turns out to be correct (and/or realized inflation rates are lower than expected), the EWG could easily generate a realized IRR of more than 10% over the next few years.

Previous Allen’s late free throw lifts Texas above No. 18 Vols 52-51
Next A look at the fair value of Vertical International Holdings Limited (HKG:8375)