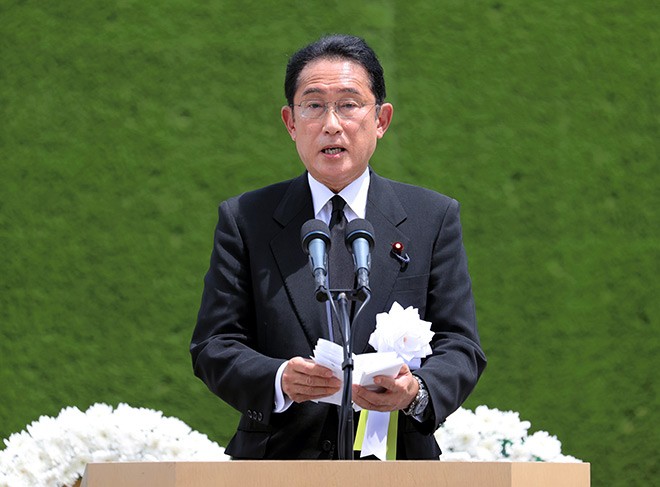 EDITORIAL: The Nuclear Weapons Ban Treaty is the ‘gateway’ to a world without nuclear weapons

Myra R. Free exit Comments Off on EDITORIAL: The Nuclear Weapons Ban Treaty is the ‘gateway’ to a world without nuclear weapons 7 Views

On the 77th anniversary of the atomic bombings of Hiroshima and Nagasaki, city hibakusha demanded that Japan sign and ratify the Treaty on the Prohibition of Nuclear Weapons (TPNW).

But Prime Minister Fumio Kishida did not even mention the agreement in either city where he delivered his speech at the annual peace commemoration ceremony.

As Russia, a nuclear superpower, threatens to use nuclear weapons in its war of aggression against Ukraine, UN Secretary-General Antonio Guterres’ comment – “The elimination of nuclear weapons is the only guarantee that they will never be used” – resonated with people around the world.

Kishida calls the TPNW the “exit” that leads to the elimination of nuclear weapons. But we believe that the treaty is “the entrance”.

Aiming for a “world without nuclear weapons” via multiple paths is Japan’s responsibility as the world’s only victim of nuclear war.

“The only realistic way to protect the future of the human race and the Earth is to stop fooling ourselves into thinking we can have nuclear weapons and never use them,” Nagasaki Mayor Tomihisa said. Taue, in his August 9 peace declaration.

Both mayors demanded that Japan participate in the TPNW.

But despite all his rhetoric about the resolution to eliminate nuclear weapons, Kishida has stuck to his policy of keeping his distance from the treaty.

Written with input from atomic bomb survivors and non-nuclear countries, the TPNW categorically prohibits the manufacture and possession of nuclear weapons, as well as any threat to use nuclear weapons.

The cities of Hiroshima and Nagasaki were deeply disappointed when Japan decided in June not to participate in the first TPNW conference, even as a mere observer.

On the other hand, Kishida is resolutely committed to the Treaty on the Non-Proliferation of Nuclear Weapons (NPT).

The treaty limits the privilege of possessing nuclear weapons only to the United States, Russia and three other major nations, and holds them accountable for nuclear disarmament talks.

The latest NPT Review Conference of Parties is currently in session in New York, which Kishida attended earlier this month and pledged that Japan would act as the treaty’s “guardian”.

However, the progress of the nuclear disarmament talks remains elusive. In fact, there are growing fears that the countries concerned may even go from disarmament to an arms race. The reconstruction of the structure of the NPT has become an emergency.

As the international security environment worsens and Japan remains under the “nuclear umbrella” of the United States, can the NPT be counted on to avert a nuclear catastrophe?

Japan’s role must be none other than to act as a bridge between nuclear and non-nuclear nations and to lead the world towards the elimination of nuclear weapons by treating the NPT and the TPNW as the proverbial two wheels.

And that, in our view, is the message delivered by the mayors of Hiroshima and Nagasaki.

Hiroshima is the ancestral home of Kishida. When he was foreign minister six years ago, his main political priority was to achieve a ‘world without nuclear weapons’, and he played a major role in arranging the visit of the then US president , Barack Obama, in Hiroshima.

“No matter how narrow, treacherous and arduous the path, I will continue,” Kishida said as he determined to pursue his goal.

How will he make the most of the TPNW, which is already in effect? The power of imagination and the capacity for decisive action of the Prime Minister are put to the test.

Previous GOP senators have blocked a $35 insulin price cap: What you need to know
Next Stock Lumen: 9.4% yield remains a must buy, here’s why (NYSE: LUMN)