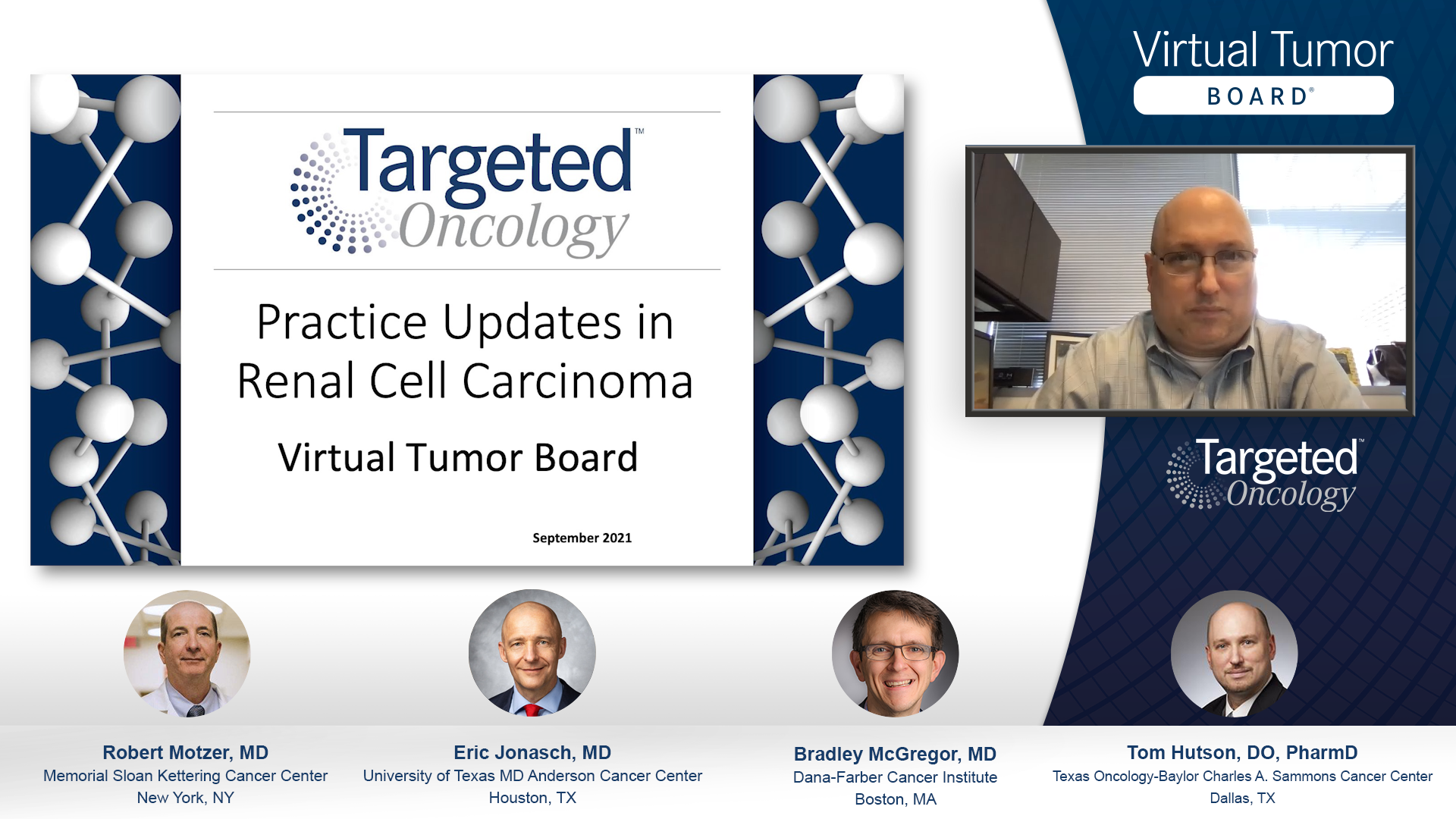 Robert Motzer, MD: This is case 2. This is a patient with a metastatic RCC. [renal cell carcinoma] with favorable characteristics at risk, presented by Dr. Eric Jonasch.

Eric Jonasch, MD: Thanks, Bob. This is a 62-year-old man with a history of metastatic renal cell carcinoma, left post-nephrectomy and adrenalectomy, demonstrating clear cell renal cell carcinoma with metastasis to the adrenal gland. Two years later, this patient relapsed into the lung with nodules, and these were biopsied and were consistent with clear cell renal cell carcinoma. This patient was observed based on the fact that he was suffering from an indolent disease of low volume, and also because of the patient’s preference. Two years later, you see continued sluggish growth on the scans. Eighteen months later, you see continued sluggish growth on scans. At this point, the increase in the total tumor burden at several lung nodules increases slightly.

Robert Motzer, MD: Thank you for this presentation of the case, Eric. What makes this patient risk-averse? According to what criteria is this allocation made?

Eric Jonasch, MD: Looking at either the MSKCC [Memorial Sloan Kettering Cancer Center] or IMDC [International Metastatic RCC Database Consortium] risk criteria, we examine whether the patient has more than a year between the initial diagnosis and systemic treatment, which they clearly correspond. Then there are other things like performance status, hypercalcemia, and depending on which one you are looking at, LDH [lactate dehydrogenase], white blood cell count, leukocytosis and thrombocytosis. This patient does not appear to have any of these negative factors. Also, what is striking about this patient is obviously the indolence of this disease.

Robert Motzer, MD: The initial strategy for this patient was surveillance at the time of identification of metastases. Is this a viable strategy to manage these patients with metastatic disease?

Eric Jonasch, MD: In 2021, this is still the case, and in an individual where there is evidence of low-volume, slow-growing oligometastatic disease in non-threatening areas of the body, these individuals may benefit from surveillance. There are studies – these are small studies, and they are not randomized – that have been published showing that if you do, you are not putting these people at risk and you are not lowering the likelihood of receiving a treatment. systemic treatment when you start it.

Robert Motzer, MD: When you follow these patients, how do you decide when to â€œpull the triggerâ€ and begin therapy for a patient like this?

Eric Jonasch, MD: It is not science; it is the art of medicine. But it is an acceleration in the growth rate of existing lesions and the development of new organic sites of involvement. For example, if that person suddenly started to develop bone metastasis, liver metastasis, or develop new multiple mediastinal lymph nodes, that would clearly prompt me to initiate systemic therapy. We saw on the previous slide that this person also started to have a general increase in the disease burden. For this 1, we want to look at the scans in detail to determine if it passes that threshold.

Robert Motzer, MD: The mainstay of treatment for RCC has been TKI [tyrosine kinase inhibitor] monotherapy, and more recently I / O [immuno-oncology] the combinations have been studied and shown to be beneficial for the entire patient population. But one of the questions for these favorable risk patients is: is it really necessary or is there a role for I / O therapy in treating the favorable risk? What’s your take on that, Bradley?

Bradley McGregor, MD: Favorable risk renal cell carcinoma is probably the most debated topic when thinking about renal cell carcinoma. Certainly, we have seen major benefits in the first-line treatment of advanced renal cell carcinoma with these incredible results from combination therapies extending to all risk groups. But then it is not pre-specified. So when you start looking at these favorable risk populations, the first follow-up looks great, and then with extended follow-up. The advantage of this TKI-I / O combination is somewhat less clear within the limits of a separate analysis. When you think of nivolumab and ipilimumab, the primary endpoint was looking at the outcome in intermediate and low risk diseases. In this initial analysis, we found a marked difference when PFS [progression-free survival] and the objective response rate was significantly better with sunitinib compared to nivolumab-ipilimumab in these favorable risk patients.

We saw extended follow-up at ESMO [European Society for Medical Oncology Congress], and if you look at this extended overall survival in the favorable risk group, it was 74 months with nivolumab-ipilimumab versus 68 months with sunitinib. With these conditional survivals, we see that if you respond to nivolumab-ipilimumab where CR [complete4 response] the rates are always above 10%, it seems to be sustainable. So it comes down to a very long discussion. TKI-I / O is certainly a reasonable option. After a long discussion, I / OI / O can certainly be considered. So do you need to keep the I / O? Can you think of TKI monotherapy? We were fortunate to have a first-line trial where we are looking at a single arm of cabozantinib with belzutifan, HIF2 [Hypoxia-Inducible Factor-2 Alpha] inhibitor, in treatment-naÃ¯ve patients. It tends to be a great option for those patients with favorable risk disease to give them a little more therapy ahead of time to hope for something.

But it comes down to a long discussion with the patient about what makes sense. I’m still wondering about prolonged I / O in a favorable risk patient: will increasing the toxicity of the 2 agents together be the best long-term option for the patient, or could you get away with it? with a sequential approach?

Robert Motzer, MD: Tom, what do you think of VEGF-TKI [vascular endothelial growth factor â€“ tyrosine kinase inhibitor] monotherapy for this patient? Would that be your choice, or would you tend to offer it I / O in combination?

Tom Hutson, DO, PharmD: The case highlights the natural history of RCC, although the best predictor of a person’s cancer behavior is their behavior. We know this scenario exists where patients can have prolonged periods of very indolent illness and then all of a sudden, for reasons that are not clear, have more explosive illness. The way the case was presented, at least my interpretation, was that it was very indolent and there are now multiple lung nodules, which almost suggests that there is a much faster development of the disease. . While single agent TKIs can be viewed as a long term strategy, we are not putting patients in a NED [no evidence of disease] state with that. I would always go for therapy that could put the patient in a state of NED with the idea of â€‹â€‹stopping therapy altogether. It is a contentious area. You can make a strong case on both sides, but we have therapies with a higher chance of achieving NED status. It would be very difficult not to want to take this route, but obviously it is the choice of the patient.