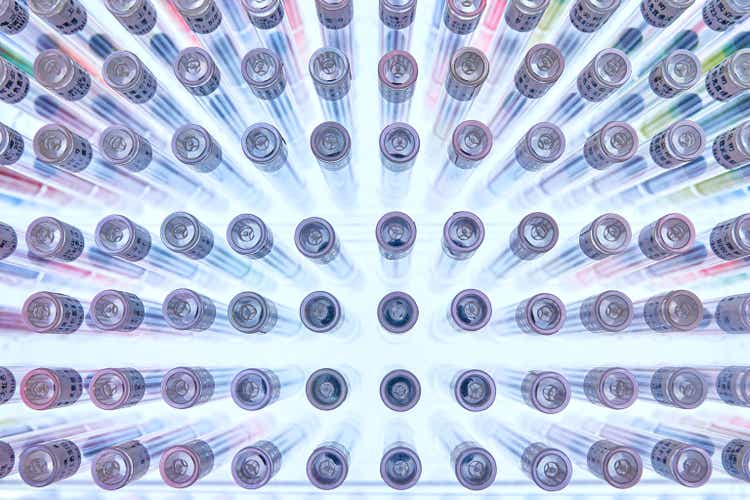 While many investors look for safe bets in times of market uncertainty, Bristol Myers Squibb (NYSE: BMY) may be the answer. The company develops biopharmaceuticals for the treatment of cancer, blood clots, etc. an excellent track record. The small number of uninsured Americans will allow BMY to continue its sales trends and continue to grow its top line and bottom line, even in times of economic uncertainty. Although many of the company’s key patents are expiring this decade and some generic versions have already begun limited rollouts, the company’s new and near-to-market products are expected to have major blockbusters that could generate plenty of revenue while helping the big picture. amount of BMY’s debt. Combine all of this with BMY’s current price and shareholder value, and the stock becomes an attractive choice in the market.

BMY is a great defensive choice for the worrisome investor

It seems that market uncertainty is present no matter where an investor looks. With inflation, rising interest rates, supply chain issues, the Russian-Ukrainian conflict, etc., investors are looking for a safe place to put their capital. A historically defensive industry in the market has been healthcare due to the inelasticity of their products. This is all the more the case for BMY because the company’s main products have a strong focus on cancer treatments. Furthermore, only about 8.6% of Americans are currently uninsured. This means that even if prices were to rise, Americans would continue to pay for BMY’s products even in uncertain times.

The rising percentage of health care costs relative to median income shows the power of pharmaceutical companies to raise prices while generating sales. From 2010 to 2020, the total percentage of median income spent on health insurance increased from 9.1% to 11.6%. At the same time, BMY increased its revenue from $19.48 billion to $42.52 billion.

Many patents end this decade

During this decade, BMY and many other pharmaceutical companies faced the problem of losing exclusivity for their most important products. These most impactful products are Revlimid, Eliquis and Opdivo and account for approximately 67% of total revenue.

Starting with the most popular product, Revlimid’s key patents expire by 2026. BMY acquired this product when it acquired Celgene for $74 billion in 2019 and it has done wonders for the company. However, some generic versions of this product are already on the market after the company faced legal battles with Dr. Reddy’s Laboratories (RDY). This case decided that while BMY has its patent until January 31, 2026, Dr. Reddy’s Labs can begin selling a limited volume of its generic product after March 2022. This is also the case for companies such as Natco and Alvogen. who were also able to start selling their generic products earlier this year. This could be very detrimental to BMY as Revlimid generated $12.8 billion in revenue in 2021 and we can see its current impact on Q1 earnings. In the first quarter, Revlimid generated $2.8 billion in revenue, missing estimates by about $100 million. It also caused BMY to cut its revenue forecast by $500 million.

The next major product is Eliquis and was developed by BMY’s alliance with Pfizer (PFE). Although many generic brands are FDA approved, the product won’t face any major competition until around 2026. This comes after the alliance’s ongoing legal battles against generic brands trying to enter the market. In 2017, BMY and Pfizer sued 25 competitors for patent infringement. Therefore, Eliquis continues to strive. In the first quarter of 2022, the product generated $3.2 billion in sales, up 12% from the previous year.

The company’s last major product, Opdivo, loses its key patents in 2028. In 2021, Opdivo generated $7.5 billion in revenue, or 16% of total revenue. This product continues to do well and saw double-digit growth in the first quarter of 2022, reaching $1.9 billion in sales.

The pipeline is a promising solution to patent expirations

BMY’s solution to the rise of generic brands is to continue producing successful products and developing its longer-lasting drugs until they lose their exclusivity. At the 2022 JP Morgan Healthcare conference, BMY said it expects Opdivo, Yervoy and Eliquis to generate an additional $8-10 billion in annual sales on top of their current revenue through 2025. GMY expects its new launches, such as Breyanzi, Reblozyl and Deucravacitinib to generate between $10 billion and $13 billion in sales. In total, the company says its new launches will generate approximately $25 billion by 2029. 4 of the products the company mentions (Reblozyl, Deucravacitinib, Mavacamten and Relatlimab) could each generate $4 billion on their own according to management . This will help BMY to diversify its income and not be heavily damaged by the release of future generic products.

Investors are concerned about debt, but it is in line with competitors

It is also important to mention what this debt is used for, ie the acquisition of other companies. As mentioned earlier, BMY acquired Celgene for $76 billion. This was done by giving each Celgene shareholder one BMY share and $50 in cash. BMY also acquired MyoKardia for $13.1 billion in 2020, or $225 per share in cash. This follows BMY’s revenue diversification strategies by creating and acquiring new products. In fact, Chief Commercial Officer Chris Boerner said in 2021:

This really speaks to the importance of not only being able to source innovation internally, but also having the financial wherewithal to be able to successfully source it externally.

BMY is also rapidly increasing its free cash flow, which will allow the company to pay down its debt. From 2019 to 2021, BMY doubled its free cash flow from around $7.4 billion to $15.2 billion, while the company’s net debt fell from $31.4 billion to 28 .4 billion dollars. If this lead continues, BMY will be able to repay its debt at a steady pace while still having cash to reinvest and buy back shares.

When using typical multiples for EV/Revenue, EV/EBITDA, P/E and P/S of BMY and its competitors and combining them with FY22 analyst consensus estimates, a price target of $111.78 can be calculated after adjusting for company cash. and debt. This implies that the stock is up around 44.04%.

It is also important to mention that the company pays a dividend of $2.16 per share, which gives a dividend yield of 2.78%. Additionally, the company has repurchased stock in previous years and increased its stock buyback program by $15 billion in December.

What does this mean for investors?

BMY is growing rapidly and appears to be a great choice for the worrisome investor. Its products will be in high demand regardless of price increases. Due to the fact that over 92% of Americans are insured, BMY will not run out of customers and will likely continue to improve its bottom line and bottom line. Although many of its product patents will expire during this decade, the company is bolstering its pipeline with new drugs that appear to be developing at an effective pace. Many investors are afraid of the company’s high amount of debt, but the company is in line with its competitors and has plenty of free cash flow it can use to pay it down. Since it also appears the stock is undervalued and shareholders are receiving increased value through a decent dividend and buyback program, I think applying a buy rating is appropriate. for the moment.