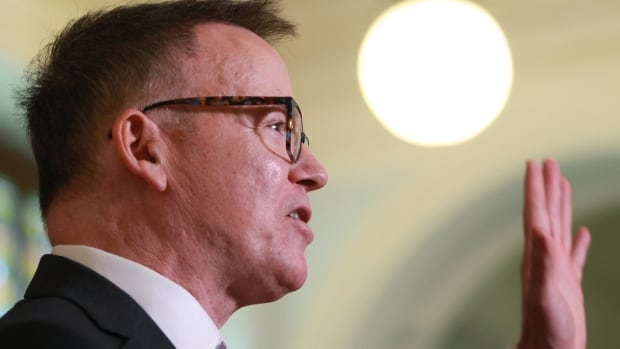 Members of the BC Liberal Party have approved a process to eventually change the party’s name by the end of the year.

Party members voted on the resolution at a convention in Penticton on Saturday that welcomed new leader Kevin Falcon and sought to outline the party’s strategy for the upcoming election, scheduled for fall 2024.

The resolution passed Saturday will give all members of the BC Liberal Party the option to vote for a new name or keep the current one by the end of the year.

“The party name should be one that reflects a diverse and inclusive big tent coalition,” Falcon said in a statement shortly after some 800 delegates voted.

The BC Liberals are not affiliated with the federal Liberal Party and have described themselves as a “made in BC free enterprise coalition”.

Liberal Trevor Halford, who represents Surrey-White Rock in the Legislative Assembly, said about 75% of delegates voted in favor of the name change process.

The party said it would immediately begin a broader consultation process over the next few months before holding a vote of the full party membership before the end of the year.

Today, BC Liberal delegates to the #BCL22 in Penticton voted to advance the name change process and begin consultations with all party members.

We want to hear from you!

The party has launched an online consultation portal allowing members to give their opinion.

“It’s a decision that the members will ultimately make, and we want to hear from everyone, so we encourage people to go online and let us know their thoughts,” Falcon said.

Falcon, who won the leadership race earlier this year, vowed to renew and rebuild the party in a “root to branch” process that included Saturday’s vote to begin a process that could see the Liberals run under a new name.

Some MPs speaking at the convention, which has 800 delegates, said there was a desire to consider a new name.

“For many, many years, a large number of members have wanted to see a name change,” she said. “Part of how you express your identity as a party is through your name.”

Great turnout for tonight’s Chefs dinner at the convention @bcliberals. You can feel the momentum! #BCL22 #BCpoli pic.twitter.com/zHNPo4icwy

Polak, a four-term former MP for Langley, where federal Conservative roots run deep, said she often had to explain to voters in elections that she was not running for the federal Liberals.

“Sometimes I would knock on the door and the owner would come out and say, ‘Mary, have you changed your allegiance? “, She said.

British Columbia’s Election Act prohibits the registration of a party under a name that has appeared on a ballot within the last 10 years.

The Liberals were reduced to 28 seats in the province’s 87-seat legislature in the last election, but have just wrapped up a spring legislative session where they challenged the NDP government on health care issues and plan to embark on a major museum reconstruction project.

“We see a government focused on a billion dollar museum while we have schools that haven’t been seismically upgraded. We have one in five people who can’t find a family doctor, nearly ‘a million people,’ Halford said.

“The next step is to become a government”

The Liberals’ recent political performance in the legislature, the new leader and the lifting of COVID-19 restrictions to allow gatherings have helped create a family reunion atmosphere in the convention, he said.

“We are focused on the next step and the next step is to become the government,” Halford said. “We have a very, very energetic group right now that has seen the massive cracks that are showing in this NDP government.”

Falcon is scheduled to address the convention on Sunday.