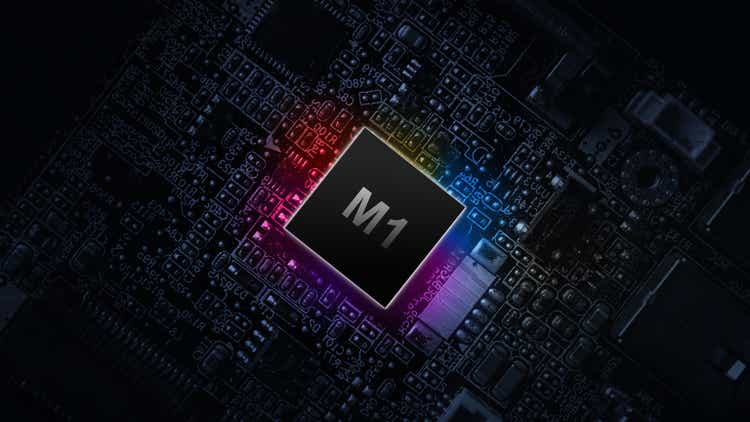 Apple (AAPL) is the largest company in the world with a market cap of $2.64 trillion and continues to deliver impressive growth in sales, earnings and free cash flow per share. Additionally, Apple’s use of debt is first in class, as the company’s return on invested capital is substantial relative to its weighted average cost of capital. Apple’s continued success in a volatile economy speaks to why it should be in your portfolio.

(Note: All financial data is sourced directly from ycharts.com under the symbol: AAPL.)

Apple has proven to be an investment of a lifetime, delivering massive returns to shareholders and becoming the most valuable company in the world. What’s more impressive is that Apple’s 3-year earnings and free cash flow per share continue to grow at double-digit rates on an annual basis.

Apple will produce FY24 EPS of $10.57 and free cash flow per share of $9.48 if it can produce similar results over the next three years. This would give Apple a forward P/E ratio of 14.64 and a forward P/FCF ratio of 16.32. These are still favorable valuation measures for Apple given that the average P/E and P/FCF ratios in the consumer electronics industry are 19.56 and 16.01, respectively. It’s also worth noting that Apple’s brand, market presence, and track record arguably deserve higher valuation metrics than its peers.

How did Apple manage to produce this level of growth?

Apple produced these numbers with impressive growth in sales and margins. FY21 revenue was $365.82 billion with a profit margin of 25.88%. Apple’s cost of goods sold (COGS) is at record highs due to chip shortages, but it still managed to grow revenue at a CAGR above its COGS.

Apple has managed to grow revenue and profit throughout the Covid-19 pandemic, tracking the highest COGS the company has seen. The fact that Apple’s revenue growth outpaced COGS growth under the following economic conditions should be telling.

Apple’s use of debt is first in class:

I’ve seen negative articles and comments about Apple’s indebtedness. However, issuing and using Apple’s debt was nothing short of a brilliant move on the company’s part. As revenues began to grow exponentially, Apple diverted money to overseas subsidiaries. This was Apple’s strategy to minimize taxes as the company did not want to repatriate its treasure at the 35% tax rate at the time. Instead, Apple decided to begin issuing debt in fiscal 2013 to bolster its domestic cash position, as the company’s cash flow was sufficient to service debt. While many may worry about Apple’s indebtedness, they shouldn’t. Apple kept its cash reserves at work instead of paying 35% tax on them, knowing that the cash flow was more than enough to cover the newly issued debt. This strategy also allowed Apple to lower its weighted average cost of capital (WACC) to 9.15% today. While that number may not sound ideal, Apple’s return on investment (ROIC) currently stands at 51.80%. Thus, issuing debt allowed Apple to avoid paying a 35% tax on its foreign cash reserves and reduce its WACC to 9.51%, while producing an ROIC of 51.80%. Even better, in December 2017, the Tax Cuts and Jobs Act was passed, lowering the tax on repatriated income to 15.5% on liquid assets and 8% on non-cash assets. Apple has meanwhile produced impeccable results and can now repatriate foreign cash at a tax rate of 15.5%.

As of FY21, the company’s total debt was $287.91 billion. However, Apple’s total current liabilities for FY21 were $125.48 billion, which means that 43.58% of Apple’s total debt matures during the year. fiscal year 22. Apple produced double-digit growth with high debt levels that are now beginning to decline. As an Apple investor, I’m excited to see the numbers Apple can produce as debt levels come down.

In conclusion, Apple always produces impressive financial results. Apple maintained solid growth in earnings and free cash flow per share amid unusually high COGS and the pandemic. Apple avoided a 35% tax on huge foreign cash reserves and produced an impressive return on investment compared to its WACC. The company has done a near perfect job of operating in the best interests of its shareholders and I am confident it will continue to do so. The effects of the pandemic will continue to wane, supply shortages should inevitably resolve and debt levels decline. Overall, Apple still has a promising path forward, especially if it can continue to absorb a larger share of the global smartphone market.